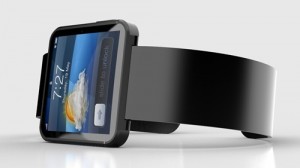 As if the smartwatch world was not exciting enough, all eyes are on the much-talked about new player in the field, the Apple Watch, possibly to be dubbed iTime. It was only a matter of time before the mighty Apple got its teeth into what is one of the fastest growing markets in the technology and gadget sector, and with plenty to play for, the rumored specifications look impressive.

The Apple Watch promises to be something pretty special, and should be seen more as a response to the clever and innovative Google Glass rather than simply another smartwatch. Apple does not do things by halves, and this is sure to make waves. The suggestions are that the Apple Watch may launch at the same time as the iPhone 6, which is set for release in September 2014. However, as usual, Apple is playing its cards close to its chest.

So what can we expect from this long awaited device? Of course, it will run on an iOS and is said to feature a flexible AMOLED display, perhaps manufactured by experts in the field LG, and will undoubtedly be a ‘trendy’ design with the ability to appeal to Apple’s core buyers. Younger generations anticipate new gadgets with great enthusiasm, and this revelation promises to be no exception. Ever the innovator, Apple is bound to push the envelope further than any of the other smartwatch models have done so far.

So far the main buyers of smartwatches have been those who use them for a sporting theme; many are designed as ‘fuel bands’ with information relation to a runner or athletes calorie count and so on, and there is a solid suggestion that Apple could link up with sportswear giants Nike for a version of the iWatch that focuses onthis. However, it is clear that Apple sees the iWatch as much more than just a fitness device, and with talk of flexible screens, and a possible three variants at launch, the market is waiting to see how this new interloper will impact on the market leading versions.

Competition is rife in smartwatch world and the market is ready for a step forward; so far the most popular models have been quite basic, in terms of capability, but Apple is perhaps the company that will rewrite the rule books and set everyone off on a new journey in smartwatch design. Look out for the Apple Watch being a popular choice for 2014 Christmas presents!