Smartwatches To Look Out For

The smartwatch is attempting to firmly establish itself in the world of mobile communications, and there are many popular smartwatches to choose from. Each has its own attributes and features, and each differs from the next in terms of capability and performance. Some are aimed firmly at the fitness arena, and offer fitness tracking apps that runners and those in training find very useful, while others are very much messaging devices. What you require from your smartwatch depends entirely on what you expect to get from it, and there is plenty of choice. 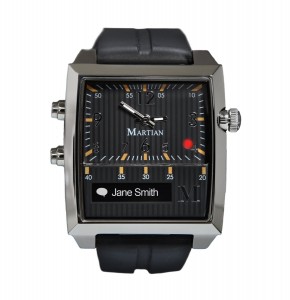 For example, the Martian, one of the more popular smartwatches due to it’s classic watch design, is a clever model with voice recognition, and like most models it requires a smartphone nearby to enable it to alert the wearer to calls and messages. However, the Timex Ironman One, while primarily designed for the fitness crew, is 3G enabled and can takes calls on its own. This phone-free capability gives it potential to become a top seller, as it will be a step ahead of those that are simply extensions of a smartphone. This is likely to be true also of the soon to be seen Apple iTime, aka Apple iWatch, which is among the most hotly anticipated new devices of recent years.

Another popular model is the i’m Watch – that is the correct spelling – which while not among the most able of designs is certainly among the most beautiful. Well crafted, unique and original, it suffers only from the problem that affects many such devices, in that it is too new in terms of software and development to be fully formed. It’s also on the higher end of the price spectrum.

It should be remembered that the smartwatch market is very much a fledgling one, and that in the coming months there are set to be unveiled several new models from some notable manufacturers. Samsung, LG, Sony and many more well-known brands have a smartwatch either on sale or due to be launched, and it is clear that many makers are targeting Christmas 2014 as the first real sales boom for this type of device.

With the advent of the Apple model will come a number of imitators, all quickly attempting to capitalize on that company’s ability to open up the eyes of consumers to new markets. There is no doubt that in no time at all we will be able to wear miniature computers on our wrists that are as capable as the smartphones we currently carry around in our pockets.